In FCS Football Week 5, we will see Brown Bears at Harvard Crimson.

Harvard Crimson is 0-1 on the season and the only game they played, they lost it 23-31 against San Diego. The passing game was decent with Jake Smith running the show. He finished with 325 passing yards, 3 touchdowns, and 1 interception but things got going in the second half. The Crimson were scoreless in the first half and they were trailing by 24. San Diego then substituted their starters and the Crimson got better.

The Brown Bears won their first game of the season after beating the Bryant Bulldogs 35-30. EJ Perry finished the game with 183 passing yards, 3 touchdowns, and 1 interception. He was also very efficient on the ground with 227 rushing yards on 18 carries and 2 rushing touchdowns. The team did not even need to kick a field goal in this game. They were so much better but the defense was leaky.

I expect lots of points in this one. Both teams have the ability to put points on the board and to make turnovers. The defenses are not solid and I expect big gains both on the ground and through the air. 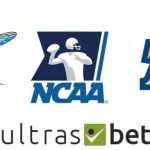