In NCAA Football Week 9, we will see SMU Mustangs at Houston Cougars.

The SMU Mustangs are currently ranked 16th in the league and they are still unbeaten. A memorable moment throughout the season so far was their 41-38 win over TCU. The Mustangs have a balanced NFL-style offense with junior Shane Buechele calling the plays. He is completing 64% of his throws for 2122 yards, 18 touchdowns, and 6 interceptions. RB Xavier Jones has 143 carries for 751 rushing yards which is good for 5.3 yards per attempt. He also has 12 touchdowns.

The Houston Cougars are not having such a good season themselves. They are 3-4 and last year’s campaign will surely not be repeated. However, 3 of their 4 losses came against ranked sides, so they fare well against weaker opponents but the talent is lacking and it costs them victories against much respectable ones. QB D’Eriq King is very inconsistent with just 52% completion of his passes for 663 yards. The team is mainly relying on the ground game with Kyle Porter rushing for 448 yards.

I expect a high-scoring game with both SMU and Houston able to score in bunches. The Mustangs, however, play very well against the run and managed to shut it in the last 3 outings- easy win and coverage of the spread for SMU. 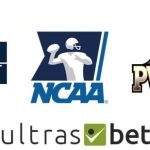