Iowa State will play against Texas in Week 13 of NCAA Football on Friday.

Iowa State is playing exceptionally well this season. The Cyclones are 6-2 and have already beat Oklahoma which is the 11th best team in the country. Their two losses came expectedly against Oklahoma State and the other one was against Louisiana in Week 1. The team prefers to pound the football down the ground but QB Brock Purdy is also capable of throwing it deep. He is completing nearly 64% of his throws for 1713 yards, 13 touchdowns, and 6 interceptions.

The Texas Longhorns are usually at the top but this year they have taken a step back. They have already lost 2 of their games against TCU and Oklahoma. What can be said about this team is that it is very young and inconsistent. You never know which face they’re going to show to the world. Two weeks ago the Longhorns recorded a very prestigious win over Oklahoma State 41-34 but Sam Ehlinger still seems to have problems throwing the football. He does have the talent, though, it has to be said.

Texas definitely has the talent to beat Iowa State and I’m betting for them as the Cyclones’ defense is susceptible to allowing points. And the big question mark for Texas is whether Ehlinger can throw enough TD passes. I think the answer to this specific game is yes and I’m picking the Longhorns. 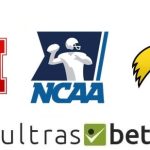