Golden State Warriors are on the first place in the Western Conference. They have ten wins and one loss since the start of the season and are in a series of eight consecutive wins. Stephen Curry was excellent at the start of this season with an average of 31.3 points per game. The Golden State Warriors recorded a victory over Memphis Grizzlies in their last game with 117 to 101. Klay Thompson was the most successful in this match with 27 points and Curry made three assists. Golden State Warriors scored an average of 123.5 points per game and are the first in this ranking, so they are expected to be very effective against Milwaukee Bucks.

The away team is the second strongest team in the Eastern Conference so far. Milwaukee Bucks has eight wins and two losses this season. They lost against Portland Trail Blazers with 118-103 and are quite likely to record two consecutive losses for the first time. Giannis Antetokounmpo scored an average of 25.8 points per game and we are going to see how he will face the strong defense of the warriors.

Milwaukee Bucks has two losses and two wins as a guest during the season, so they are a very strong home team. Now they will go to the Oracle Arena – the home of the champions, as I think Golden State Warriors will win this game. 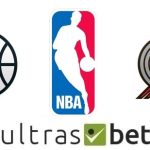