In the NBA playoffs, we will see Golden State Warriors at Portland Trail Blazers.

The Golden State Warriors are one win away from getting to the NBA Finals for a 5th straight season. They showed in this series that they are the much better side than the Blazers. The team is loaded offensively and they are getting the job done even without Kevin Durant. Steph Curry is leading the team in the series while Klay Thompson continues to shoot very well from three and contribute big time.

The Portland Trail Blazers started very well game 3 and for the most part we were convinced that they can get back on track. However, they couldn’t finish things off and let the game slip. Damian Lillard is averaging 26.8 points and 6.3 assists while CJ McCollum is averaging 24.6 points and 5.2 rebounds in the playoffs.

I expect the Warriors to step on the floor on Sunday with big confidence that they will finish the series in game 4. I believe that this confidence will make them underestimate their opponent and Damian Lillard and CJ McCollum, who will for sure come out very motivated, will get a victory and force a game 5 in Oakland. Portland had its chances in the previous games to make this an interesting series and I believe that they will get a consolidation win. 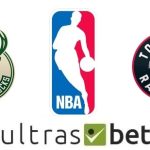