Uptown Aces Casino hit the market in 2012, making them a relatively new casino, but also old enough to have gained the experienced needed to a provide a balanced gaming opportunity.

Uptown Aces is one of the most popular RealTime Gaming online casinos and is compatible with all smartphones and tablet devices.

New players bonus wishes come true via the 100% Uptown Aces mobile bonuses, starting off with a 100% mobile bonus plus 100 Aladdin free spins when bonus code MOBILEWISHES is used. The offer is available every week and requires a minimum deposit of $35. No maximum withdrawal cap is part of the bonus restrictions and the bonus is subject to wagering of 30 times scratch cards, keno, and slots.

Desktop players have access to a wide variety of games available on instant or free download play including slots, table & card games, video poker, and specialty games such as bingo, keno, and scratchcards.

Uptown Aces Casino is part of the Deckmedia N.V. Casinos and established in 2012 to provide a user-friendly experience where international players can enjoy gaming in a safe and secure virtual atmosphere. The banking options available for both withdrawing and depositing include EcoPayz, Bitcoin, Skrill, Neteller, and Bank Wire Transfer and all transactions are processed in USD.

All games available on desktop and mobile devices are random numbers generated and certified as fair while members’ information and all data exchanges are encrypted via 128-bit SSL technology.

Assistance to all members is available via live chat, Skype, telephone, and e-mail 24/7/365. Uptown Aces Casino is regulated and licensed via the Government of Cyprus and the Curacao Government and while US players are welcomed, players from the UK, Israel, and Moldova are not accepted. 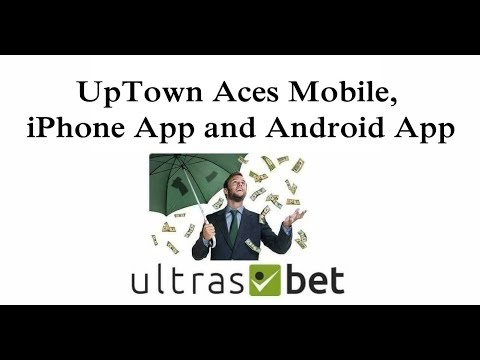 For all the players that want to have a good time playing online casino games at their mobile device, we recommend them to download UpTown Aces app. You will enjoy RTG casino games as their application has a wonderful design and very easy to browse sections. Everything is secured and you can contact the support directly from UpTown Aces Casino app.