In the NBA finals, we will see Toronto Raptors at Golden State Warriors.

The Toronto Raptors will hope that they didn’t blow their chances away for a championship in game 5. Kawhi Leonard didn’t play well in the first half but made up for his performances in the second half with 26 points, 12 rebounds, and 6 assists. Toronto didn’t shoot the ball well in this particular game, especially from three where they completed just 8 out of their 32 attempts.

On the other side, Golden State shot the ball exceptionally well. They scored 20 threes from 42 attempts and that proved to be the difference in game 5. Steph Curry finished with 31 points, 8 rebounds, and 7 assists, Klay Thompson added 26 points while Cousins and Draymond were the other two players with at least 10 points. Even though Kawhi took everything in his hands in the latter stages of the game, Curry and Thompson scored 3 unanswered threes in the last 3 minutes of the game and gave Golden State the victory.

Having in mind that Toronto didn’t have any advantage in the three-point game a few days ago and they were still close to winning the game in Canada, I expect them to bounce back with an even stronger performance in Oakland. The defense will win them the championship in game 6 on the road. 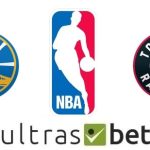