The New Saints from Wales hosts APOEL Nicosia in the first leg of a second qualifying round of 2016–17 UEFA Champions League.

Lucky for Cypriots in the draw to them wards of the rival one of the most pleasant possible opponents. Without any doubt, there is no basis for comparison between these two teams. The hosts are champions Wales last season but have neither the experience nor class nor the capabilities of APOEL. Cypriots have achieved a number of successes in European club competitions in recent years.

TNS participate in the Champions League for the 5th consecutive season, but the success of Welsh in no way can be compared with those of the upcoming opponent. The biggest success of this team in the “tournament of the rich” are related to the removal of B36 last year and Tre Penne this year. In both cases, it comes to matches from the 1st round of the first mentioned team from the Faroe Islands, and the second in from San Marino.

Over the years, the team of APOEL Nicosia has repeatedly shown that it plays a very strong own stadium and repeatedly is allowed to play less in the first game. The New Saints will seek to play good in a defense. APOEL will seek victory, but it will not come as easy as it seems at first glance. I expect THC impede illustrious opponent and be a major contribution to obtain a low-scoring. 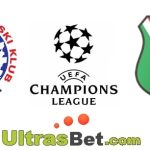