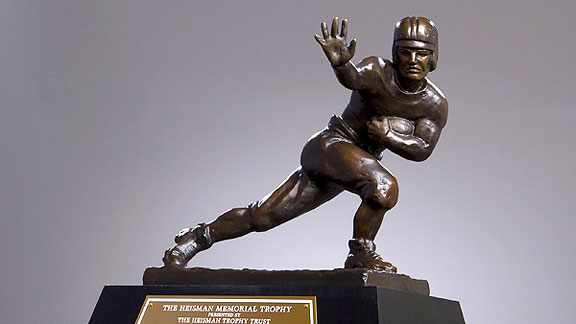 This year we have 2 Heisman trophy favorites who are more likely than the others to win the award. The interesting thing is that Kyler Murray and Dwayne Haskins who are the last 2 winners were longshot favorites to win the trophy before the beginning of the season. The last few years the award goes to quarterbacks and it usually doesn’t go to quarterbacks who go on and win the NCAA Championship game. 1 of the last 9 Heisman trophy winners was a running back and it was Derrick Henry in 2015.

The favorites this year are Tua Tagovailoa and Trevor Lawrence, the quarterbacks of the best college teams in the country, Alabama and Clemson respectively. If they were entering the NFL Draft in 2019, they would probably be the first two picks, ahead of last year’s Heisman Trophy winner– Kyler Murray. Although I believe that these two quarterbacks have the biggest chance to win the award due to the fact that they will almost certainly finish the season without a single loss, I would like to point out that in the past few years, the favorite has never become the winner.

If we look at the odds, we see a couple of interesting names that come out. Jalen Hurts will be running the Oklahoma offense which was red hot last year. Adrian Martinez and Justin Fields will also run teams that rely on the offense more than they rely on their defense. Jake Fromm had a very good season with last year with Georgia and I expect them to qualify for the postseason this year. Ian Book will be under centre for Notre Dame who I believe will make a push for the playoffs as well.

Georgia have an advantage that D’Andre Swift is on their side as a running back. Jake Fromm will benefit from it and he will have many guys to throw the football to when Swift is beside him. He finished last season with 30 touchdowns and 6 interceptions and I believe that he will improve his stats in his NFL Draft year. I don’t think that Trevor Lawrence and Tua Tagovailoa have chances for this trophy because usually, the more interesting stories get the talk and Jake Fromm’s Georgia will be such a topic since they haven’t won the National Championship since 1980 and they have only been in the postseason once in the past few years.